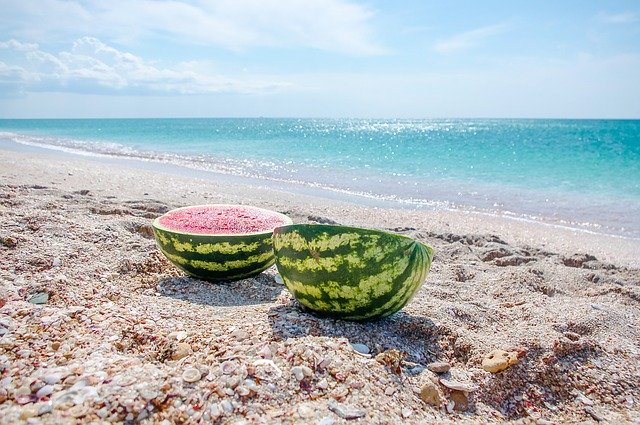 Calone in the perfume industry is known as the “watermelon ketone.” The purpose is to give a fragrance the scent of a seashore through notes of marine and ozone.

It is basically an artificial marine odorant that was discovered by Pfizer in 1966.

This component was used in the 1980’s but it became very popular in the 1990’s especially in men’s cologne.

Out with the old mossy barbershop style scents, and not quite into tobacco fragrances for men, and we look at our fresh aquatics of the 90’s.

Calone smells like a variety of notes including a powerful note of sea-breeze. It also has components of floral notes. This helps to explain what is calone.

This gives it that popular freshness with watermelon.

Because of its artificial design, there can be slight variances in the scent. This can also be attributed to individual differences in how people identify particular notes and scents.

The Impact of Calone on The Fragrance Industry

This is what defined the 1990’s in both mens and womens fragrances. Basically, a new perfume family was born. This was the start of the fresh aquatics boom.

So, how did calone become a powerhouse note in the 1990’s?

It had a very intense scent of watermelon, so they decided to patent it. Once the patent expired, the note started to take off. More and more companies started to manufacture it, under different names of course. Some of the names included watermelon ketone and Aquamore.

After people started to tire of the intense notes in Calone, new synthetics were born off of the chemical structure which featured more or less pronounced similar notes.

This would have not happened if we did not have the fresh aquatic boom of the 90’s. We would have missed out on fragrances like L’eau D’Issey.

Which Men’s Fragrances have Calone In It?

Released in 1996 by Giorgio Armani, this fragrance is the epitome of aromatic aquatic for men. It has a sweet and salty scent of ocean water with bitter citrus. It is followed with notes of woods and musk.

This is like sunning on a beach in the Mediterranean.

For men who are not into fragrances, they would describe it as a blast of citrus and ocean air. This was the definition of the 90’s aquatics.

This is still quite a hit today, and you can read some of the reviews here to see how people respond to the fragrance today.

Cool Water was one of the pioneers with its release in 1988. It is a blast of calone with lavender and mint.

This fragrance is still quite popular today with men.

Released in the 1990’s this is not quite a Calone powerhouse, but more of a component.

It opens with mostly Yuzu and lemon, and then it moves to a floral with lily of the valley followed by synthetic Calone notes.

This is the classic citrus and marine fragrance that was so popular then.

Which Women’s Perfumes have Calone In It?

This fragrance came out much later, but it was inspired by the prior boom of Calone.

This is a fruity with a chypre base with a definite aquatic note to it.

This is a nice clean, fresh aquatic scent. More floral and melon than the masculine fragrances with strong aquatic oceanic notes.

Every Storm A Serenade by Imaginary Authors

Sea Water, Vetiver, and Spruce. Some would call this stormy and seductive.