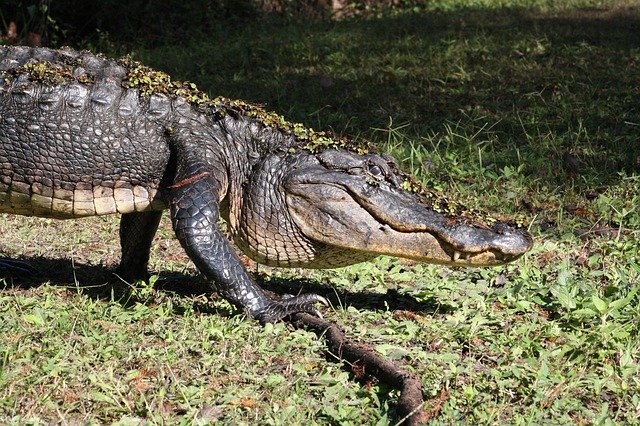 Alligators look like prehistoric monsters, and if you live in the South, there is a good chance that you have encountered one in the wild.

One look at these creatures up close and you may fear for your life. This may make you wonder how fast can an alligator run on land? Alligators can run as fast as 11 mph on land. This top speed depends on many factors including their size, the terrain, and of course, how motivated they are in catching something.

How Fast Do Alligators Run On Land?

There are only two species of alligators in the world. The only species in the United States is the American Alligator which is what we are referring to in this article.

The average size of an adult alligator is 10-15 feet and 1,000 pounds according to National Geographic. Even with that size, they can reach a nice speed!

Can a gator chase you down and catch you. Well, yes, of course they can. However, alligators can not maintain their highest speed for long time.

Remember, these are water creatures, and they do not like to hunt on land. Generally speaking, alligators will leave you alone if you do not approach them or get near their nests or young.

In addition to that, gators don’t usually like to hunt animals (or people) that are large. If a gator hunts down a big animal, it will take it to the bottom and stuff it under a log.

This will allow the dead animal to soften up and rot for easier eating later. Alligators like to eat smaller things whole.

A more realistic speed of a gator on land would be 7-10 mph for a short distance. This is different that top speed.

What States Have Alligators

They following states have alligators:

Map Of Where Alligators Are In America

Basically, gators live in the southeast running from parts of North Carolina, down the coast into parts of Texas and Oklahoma.

Florida alone has close to 1.5 million alligators out of the 5 million or so in the United States. So, if you plan to visit Florida or any other state listed here, keep in mind that alligators are out in the wild.

Now, you usually won’t see them, but if you go to areas around water like ponds, lakes, and even canals, you may run into one.

It is not uncommon to go fishing in a river in the south and come upon one in your boat.

Should You Run Away From An Alligator By Zig-Zag?

There is a common myth that the best way to run away from an alligator is to run in a zig zag motion that will confuse the alligator. Plus, it’s short legs will not allow it to turn back and forth quickly.

The best path to run away from an alligator is a straight line. It will actually take you longer to get from point A to point B if you keep zig zagging.

For reference, Tyreek Hill, who is an insanely fast wide receiver for The Kansas City Chiefs tops out at 22.64 mph and Olympic sprinter Usain Bolt hits 28 mph.

How Fast Can An Alligator Swim?

Now that we know how fast a gator is on land, how about in the water which is their natural habitat?

Alligators can swim up to 20 mph in the water. Alligators are incredible swimmers and they have a very strong tail that helps them move in the water.

They prefer to hunt at dusk or dawn, and they love to wait and pounce on their prey.

To do this, they need to move very quickly toward its prey to ensure it has a full stomach.

In short, alligators can run fast, up to 11 mph in the best case scenario (or worst case if they are chasing you.)

The good news, according to Corbin Maxey is

You’re more likely to be attacked by a dog or even killed by a cow than have an encounter, a negative one, with an alligator.