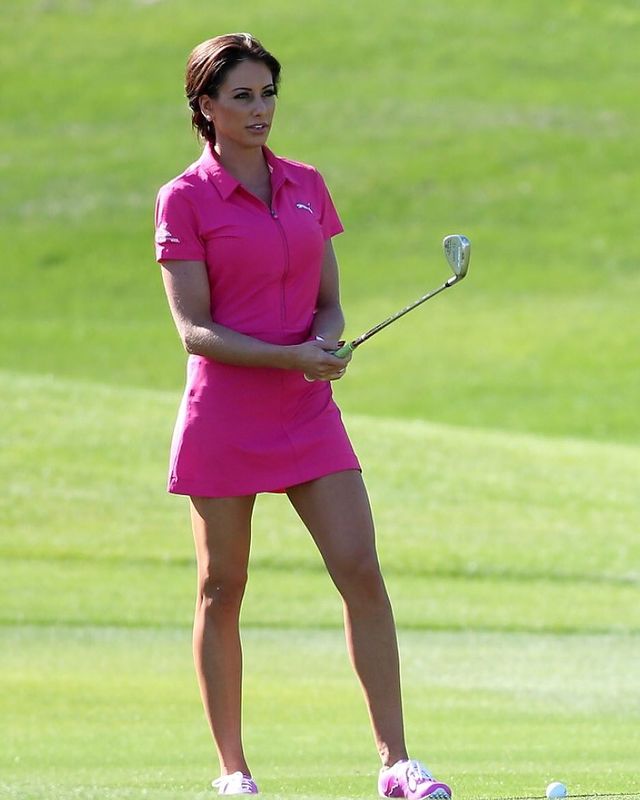 One of the most popular woman in the golfing world is Holly Sonders. Holly became famous when she took a job at the Golf Channel and later at Fox Sports.

She played golf in college at Michigan State, and parlayed that into a lucrative career in sports media.

Her rise to popularity on social media is similar to other female golfers like Paige Spiranac.

In addition to her talent on the job, she was always the topic of conversation around being the hottest woman in golf. As a matter of fact, she was named the most beautiful woman of golf by Golf.com

Ok, but who is Holly Sonders? Holly is a golfer, reporter, model, TV host, entrepreneur, and social media star.

Holly started playing golf at the early age of 5.

She learned to play golf from her mother who was an avid golfer. Her mom was good at golf. So good, she was the club champion at Marysville Country Club for 20 years straight.

Her mom was there with her throughout her entire life at golf events.

Holly began receiving calls as a sophomore in high school to come play golf at Division I schools.

She visited schools like Ohio State and Vanderbilt, but ultimately ended up at Michigan State to play golf.

Holly attended Michigan State University, and she played on the golf team for 4 years. While she was there, they won the Conference Championship.

If you want to find more information about her golf stats, you can view them here. Remember, her name was Holly Niederkohr in college.

Holly became well known due to her drive and persistence to be successful. She knew that she was not good enough to become a professional golfer, but she did want to be involved in sports.

She studied Journalism in college.

She decided to be in broadcasting. She reached out to the Golf Channel while playing golf at Michigan State. Joe Riley was the person at the Golf Channel that she constantly badgered about coming to work there. Fortunately for her, it paid off.

The Golf Channel told her she needed more TV experience before they would consider her.

After college, she joined a TV Station in Little Rock, Arkansas. Holly was a reporter doing various stories for a small town station in the south. She did this to get experience on live TV. She worked there for 9 months.

Where did the name Holly Sonders come from? Sonders is a stage name, and it is not from a marriage.

She joined the Golf Channel when she was 21.

She started off doing recorded 30 second clips. According to her, this was because she was not good enough to do live TV to start with.

After a while, she received more roles and started doing live TV and tournaments.

She was working 7 days a week, and would usually wake up a 3 AM to start her day. The work was a lot, and it left her with no personal or social life.

She would also do segments and play golf with professional golfers like Natalie Gulbis.

She married one of her co-hosts at the Golf Channel, Eric Kuselias. She later divorced Kuselias.

She signed a new contract and later joined Fox Sports at age 26.

Holly joined Fox Sports because it was a better opportunity for her, and she got to move to Los Angeles.

She did sports for Fox with the NFL, College Football, and golf.

Sanders worked for Fox Sports for 3 years, and her last year there was in 2019.

Holly has been a part of several somewhat famous interviews.

When Fox finally took over some golf coverage,

During the USGA’s Championship broadcast, she had on on-air moment when she asked Jordan Speith whether he packed an additional outfit for a potential Monday playoff.

Speith answered that Under Armour would take care of him. It was quite an interesting question to ask after Speith’s dramatic victory.

When Holly was working for the Golf Channel, she married one of her co-workers, Eric Kuselias.

Eric is an award winning broadcaster, TV and radio host who has worked for sports giants like ESPN and CBS.

Eric was 20 years older and had kids. He moved back to Connecticut while they were on the show to be with his kids and he left the Morning Drive Show.

Their marriage ended in divorce in 2016.

Being a celebrity also brings about a public dating and love life. Holly Sonders has had several high profile boyfriends over the years.

Holly dated Arizona Cardinals Head Coach Kliff Kingsbury in 2019. The romance did not last long and Kingsbury broke it off with Sonders in the same year.

Shortly after the break up with Kliff Kingsbury, Sonders started dating gambling and sports consultant Dave Oancea, who is known by the name, Vegas Dave.

She met De La Hoya in June of 2021 when she was interviewing him.

Where Is Holly Sonders Today?

What happened to Holly Sonders?

After ending her job with Fox Sports, she decided to start her own website. This was easy to promote as she had 500,000 followers just on Instagram

She started a subscription website that is similar to OnlyFans. According to Sonders, she makes 20 times more money from her site than she did at Golf Channel.

How Much Money Does She Make?

According to an interview, Sonders said she made about $60,000 a year while working for the Golf Channel. She also posted on Instagram that her subscription service website makes literally 20 times more money than she made at the Golf Channel. 20 X 60k=$1.2 million a year.